The home of space age pop and incredibly strange music. 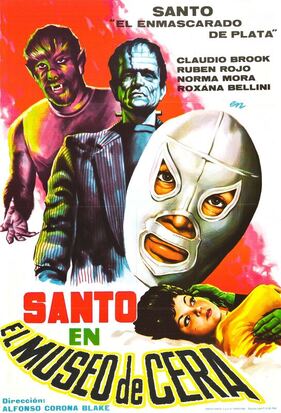 Because so many of you asked for it, Cinema con Queso returns to Liberty Hall in Lawrence on January 20 with a two-fisted double feature of lucha libre thrills!

First off, Mexico's most celebrated luchador is up to his mask in monsters in 1963's Santo in the Wax Museum.  It's a wild blend of classic horror films like House of Wax and Island of Lost Souls, in which mad scientist Dr. Karol runs a wax museum as a front for his bizarre and illegal experiments.

Following a series of unexplained disappearances, El Santo is brought in to solve the mystery.  What he finds is a secret laboratory where Dr. Karol is creating an assortment of ghoulish creatures in the dungeon-style grotto located beneath the wax museum.

While he wasn't the first luchador to appear onscreen, El Santo is certainly the most popular, with more than 50 films to his credit between the late 1950s and 1982.  Many of the films - especially in later years - are low-budget affairs, with ridiculous, repetitive storylines.  A few, however, stand out as classics of the genre, and Santo in the Wax Museum is certainly among them!

The second half of our big double feature is Academy of Doom (2008), starring the legendary luchador and film star Mil Mascaras.  Also featured are luchadores La Torcha, El Medico Angel, Luctor, Dramatico, The Magister and others.

A series of bizarre murders occur in and around the Mil Mascaras Wrestling Academy.  La Torcha calls in Mil Mascaras to investigate, and he discovers the villainous Luctor is attempting to take over the Academy.

Academy of Doom was shot in Columbia, Missouri, at the same time as 2006's Mil Mascaras vs. the Aztec Mummy.  It's one of three lucha libre films produced by University of Missouri professor Jeffrey Uhlmann (who appears as Luctor in Academy of Doom).