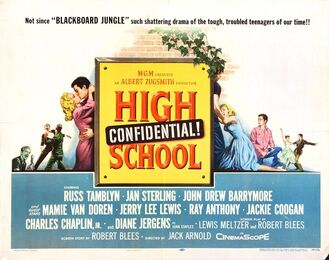 The age of juvenile delinquents, bullet bras and hot rods lives again in a night of teenage rebellion at our next Cinema a Go Go.

Fanning the flames of Eisenhower America’s growing paranoia, High School Confidential! is the quintessential juvenile delinquency film — celebrating the very sex-drugs-and-rock’n’roll culture it pretends to condemn. Russ Tamblyn (just off his Oscar-nominated turn in West Side Story) stars as Tony Baker, the new kid at Santa Bellow High, whose cocky attitude and ambitious weed-dealing enable him to infiltrate the gang of a local narcotics boss.

​
While High School Confidential! deals with the evils of the demon weed, Date Bait takes on the perils of teenage sex.  Two confused teenagers are in love and want to get hitched, but their uptight parents say, "No way!'' The couple finds themselves on the sleazy side of town where they are victimized by the new bride's hoodlum ex-boyfriend, his psychotic drug-addicted brother and other people in show business.

Date Bait star Gary Clarke launched his acting career in teen and horror exploitation classics, peaking in 1958 when he appeared in Dragstrip Riot, How To Make A Monster and Missile To The Moon. He is best remembered for his role as Steve, a singing cowpuncher on TV's The Virginian.